Wall Street’s rebound on Friday dissipated some of the gloom that pervaded since the Fed on Wednesday hiked interest rates, while Chairman Jerome Powell said policymakers will likely take rates higher than envisioned in their bid to crush inflation.

Nevertheless, the S&P 500 finished the week with a 4.6% loss, likely burning many bulls that had jumped aboard an October rally that lifted the index more than 8% from its lows. A break of the index’s Oct. 12 closing low would mark the fifth time this year that stocks have rallied by 6% or more only to reverse course and plumb fresh depths. 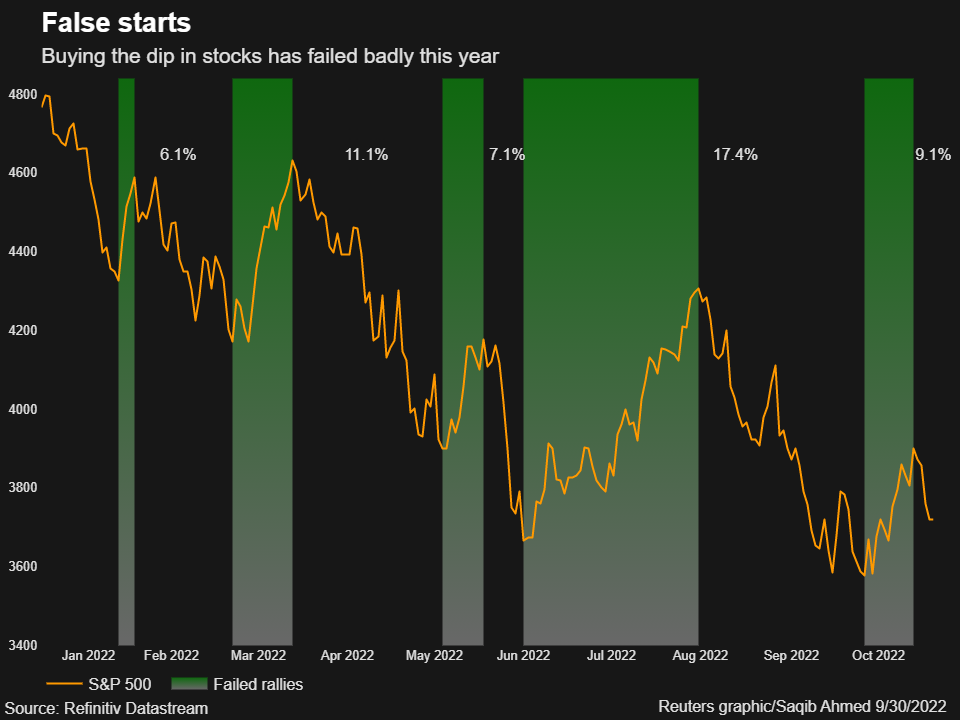 Meanwhile, data from BoFA Global Research showed some $62.1 billion flowing into cash in the latest week, the largest inflows since the COVID-19 crash of early 2020, underlining pessimism that has prevailed among many market participants.

“We think we are on the path for a rocky landing for the economy, and next week we will get two pretty big clues as to what it’s going to look like,” said Steve Chiavraone, head of multi-asset solutions at Federated Hermes, who is holding larger-than-normal allocations in cash and commodities.

Consumer price data has driven huge market moves this year, as surging inflation forced investors to ramp up expectations for Fed rate hikes. A stronger-than-expected reading on Nov. 10 would likely bolster the case for the Fed to continue.

Investors are now pricing in a peak of around 5.1% for the fed funds rate next year, compared to expectations of just under 5% before the most recent Fed meeting. The central bank has raised rates to 3.75% this year.

“If we get lower inflation reading then you could get a relief rally based on that data,” said Emily Roland, co-chief investment strategist at John Hancock Investment Management. In that case, however, “markets will be more focused on higher probability of a recession.”

Strategists at Wells Fargo believe CPI is more likely to fall short of expectations. They see the Fed’s terminal rate falling by 12 basis points or more if CPI comes in at a monthly gain below 0.4%. Analysts polled by Reuters expect a 0.5% monthly rise.

At the same time, analysts said a surprise win by Democrats in the Nov. 8 midterm election, which will determine control of Congress, could fuel concerns about more fiscal spending and inflation.

Republicans have been leading in polls and betting markets and many analysts believe the likely result will be a split government, with GOP control of the House of Representatives and possibly the Senate for the second half of Democratic President Joe Biden’s term.

“If the Dems were to retain full control of Congress, you’re more likely to see fiscal expenditures rise and that would be highly problematic in this inflationary environment,” said Spenser Lerner, a portfolio manager at Harbor Capital.

Options hedges on the S&P 500 imply a move of nearly 3% in either direction on the day after the election, analysts at Goldman Sachs wrote this week, nearly twice the size of the average daily move the index has recorded this year.

Some investors are more hopeful regarding the period of stronger markets that past midterm elections have ushered in rather than on moves stemming from the vote itself: the S&P 500 has posted a positive return in the 12 months following all 19 midterm elections since World War Two, according to CFRA Research.

Similar gains could be in store this time around – as long as inflation numbers are not hotter than investors expect, said Kei Sasaki, senior portfolio advisor at Northern Trust, who believes energy and financial stocks will perform well in a divided government.

“The results of the midterm will give greater visibility and help draw investor confidence higher,” he said.